The Life & Death of Thomas Wolsey, Cardinall (sic), divided into three parts, His Aspiring, Triumph and Death. By Thomas Storer, student of Christ Church in Oxford. Reprinted from the Edition of 1599. With an introducton and notes.

This long poem is Thomas Storer's principal work. Originally published in 1599 : this is its first separate reissue since that time : it includes a 7pp Introduction and 13pp of Notes. *** Thomas Storer 1571–1604 was an Elizabethan poet whose work was included in the famous poetical miscellany England's Parnassus of 1600.
View More...

The Welcome Of Isis : a poem occasioned by an expected visit of the Duke of Wellington to the University of Oxford [in 1820].

Scarce book. No copy in Cambridge University Library. See Bodleian Library recording this 1834 Slatter Edition and also an 1820 issue with different imprint. This Slatter Edition with preliminary Advertisement stating 'this poem was written in anticipation of a visit . so long since as the year 1820; and that, consequently, some of the incidents referred to relate to that period'. Boone was an accomplished poet - at Oxford he won the Chancellor's Prize and the Newdigate Prize - and is now known best for his verse satire of university life The Oxford Spy 1818-19. He was later a teacher at Chart...
View More... 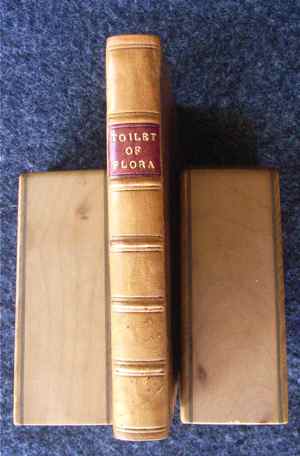 The Toilet Of Flora [translated from Pierre-Joseph Buc'hoz] : or a collection of the most simple and approved methods of preparing baths, essences, pomatums, powders, perfumes, sweet-scented waters and opiates. With receipts for cosmetics of every kind ... for the use of the ladies. New Edition Improved.

Scarce and important book. First published in French 1771 : and in English 1772. For this 2nd English Edition, see NUC listing 5 copies only : and see 18thC STC noting the BL copy only. Later English editions included an engraved plate : none was issued for this improved 2nd English Edition. *** The Toilet of Flora was an important book in the development of natural vegetable-based cosmetics and treatments of every kind. Until this time, 18th century cosmetics, especially French, had particularly featured the heavy use of lead-based white paint and mercury-based rouge. The harmful toxicity o...
View More...

Talavera. Ninth Edition : to which are added Other Poems [WITH] Tribute To The Memory of the Rt Hon Spencer Perceval. By a Friend. Second Edition.

Rare. The Tribute To Perceval - printed privately for the anonymous Author - is not listed in the British Library or Library of Congress catalogues. See Cambridge University Library listing only the anonymous 1812 1st Edition. Perceval was Prime Minister at the time of the Battle of Talavera, during the Peninsular War, and was the only British head of government to have been assassinated. The 9th Edition of Talavera is the first to include the additional poems. Talavera was a British victory in the Peninsular War : the other poems here include War Song : Songs Of Trafalgar : To Him Who Despair...
View More...

The Rare 1821 Reissue : the title calls for 6 plates, but in this copy only the hand-coloured aquatint of the Storming Of St Sebastians is present [drawn & etched by W. Heath, aquatinted by J. C. Stadler]. *** The Wars Of Wellington was originally issued in 1819 with 30 plates : this 1821 Reissue was provided with a new title-page calling for only 6 plates. The work is an imitation of William Combe's famous series of Dr Syntax narrative poetical works : here the very long narrative poem is supported by extensive factual prose footnotes. See Tooley 154 describing this as A Syntax Imitation; a...
View More...

The Nun Of Arrouca : a tale.

Rare early novel by the youthful Lord John Russell, later grandfather to the philosopher Bertrand Russell. A radical liberal, Lord John Russell twice headed the British government as a major reforming Prime Minister. In his youth he had several times visited Portugal, where he met Wellington; and had also travelled to Elba to meet Napoleon. ** In this late-Gothic romantic novella Edward Pembroke, a young English officer serving in the Peninsular War, is wounded while heroically rescuing the nuns of a Portuguese convent from the inevitable depredations of a French squadron. He is nursed to heal...
View More...